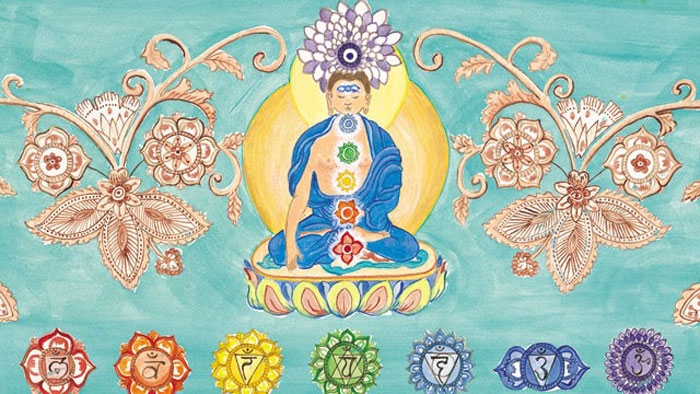 The seven main chakras are situated a few centimetres in front of the body and in order to feel then and work with them some training in yoga and meditation is needed. The key to develop this very special sensitivity is a combination of stable sharp focus and deep relaxation. Having these elements together will allow us, with some training, to have a clear and systematic experience of the chakras. The Chakras are mentioned already in the Upanishads more than 2500 years ago, and they are explained in detail in the three fundamental texts of Hatha yoga; the ‘Hatha Yoga Pradipika’, ‘Gheranda Samhita’ and ‘Shiva Samhita’ about 500 years ago. Even if these texts were not kept secret, there was almost no reference of them in west until the end of the 19th century, when the Theosophical Society of Madame Blavatsky brought their knowledge to west, together with Annie Besant and Charles Leadbeater. The Theosophical Society made two crucial mistakes in transferring the knowledge further. First they moved the sexual chakra from the sexual organs to the spine, probably to comply more with the conservative environment of that time. This mistake was quickly fixed and there are no teachings about spinal chakras anymore. The second big mistake they made was to move the navel chakra, “Manipura Chakra” from the navel to the solar plexus, probably to look more scientific with the spirit of that time when the yoga research and study on the nervous system was the cutting edge of science. Unfortunately this absurd mistake survived and in many tantra yoga books this chakra is still described as being in the solar plexus, even though all the ancient texts show clearly that the navel chakra, “Manipura Chakra” is situated in the navel. Generally the knowledge of chakras got very diluted, so many of the secrets of the chakras are as sealed as they were 200 years ago. This series of articles is aimed to reveal basic knowledge of the chakras, enough so we can have a direct experience of each one the chakras and then compare each direct experience with the traditional knowledge.