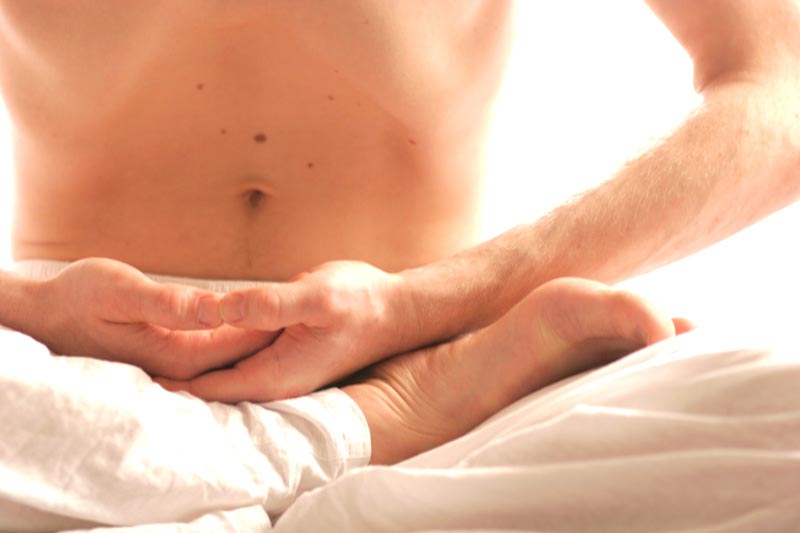 “The semen is depending on thought, and life depends on the semen, therefore also the semen and also thought need to be watched over with great attention.”

In whichever way you look, in order to enter the world of tantric lovemaking, you need to learn how to stop ejaculating involuntarily. In this series of articles we will reveal how to do that.

Throughout history, men have been puzzled with the following, fundamental question, “How on earth do you truly satisfy a woman?” How do you bring a

real smile on the face of that mysterious feminine creator? Tantra whispers in her ancient writings the secret formula that will open the heart of a woman and will make any boy turn into a man and make the sexual act turn into a spiritual ecstasy of great magnitude. In order to do these three great things the first step is to become a master of your semen.

Before we explain exactly how it is done, let’s see first why we do it. Some say that ejaculating is a natural act, this is how we were born, this is how it works with animals, so why go against our nature?

To these arguments, the tantra teacher answers: peeing is also a natural action, and we learn to control it; we don’t just pee when our bladder is full. In the same way that we control those needs, we need to learn to control our ejaculation reflex and make it a voluntary one, so we can ejaculate when we want to bring new life to this world and keep this valuable life liquid inside when we don’t intend to do that.

Freedom lays in having a choice, a true choice, a person who cannot control when he pees cannot say he is more free than one who controls it. The way to really grow as a man is to master the animalistic, unconscious, gross sexual urge which pushes him to ejaculate in a few minutes leaving his lover frustrated.

A woman needs half an hour of good continuous and loving stimuli in order to arrive in the first states of orgasm. (A woman can have more than 30 kinds of orgasm. We will name a few of them in the following articles). So a man who cannot control his animalistic sexuality will leave his woman rather unfulfilled. And a man who masters this function can prolong the act of love for hours and hours. Thus, the woman can experience many beautiful and ecstatic orgasms which go ever deeper in her heart and in her entire being.

Another curtail argument is the hidden force that exists in the sexual fluids of the man. In all authentic spiritual traditions these fluids are regarded as the sacred essence of life, holding in them an immense energy that could be harnessed into a great spiritual evolution. In the words of an ancient spiritual text from China: “Don’t pore your semen uselessly, don’t throw it like you are throwing something down from the sky, you will disturb the five fundamental bodily organs, wound the energy channels (meridians) and as a result you will cause all form of disease.” (Ishampo).

These and other topics regarding coupled relationships are discussed at our polarity retreat.

In the previous article, we began to understand why it is so important for men to stop ejaculating involuntarily. We ended with a quote from an ancient Chinese text; “Don’t pore your semen uselessly, don’t throw it like you are throwing something down from the sky, you will disturb the five fundamental bodily organs, wound the energy channels (meridians) and as a result you will cause all form of disease.” (Ishampo). This declaration reflects very much the Taoist view, which does not see the sexual energy as something dirty that we need to get rid of, but rather as a balancing, life giving force, that needs to be cherished in order to maintain the healthy functions of our organism.

Yoga, a close sister of Tantra, places even greater importance on containing the sexual energy. Contained within the “ten commandments” of yoga, the Yama and Niyama, there is a special command which is specifically directed towards maintaining and containing sexual energy.

Among monotheistic religions, Judaism states in the clearest way that one “must not waste his semen for nothing.” The most important book on Jewish mysticism, the Zohar, claims that it is a severe sin, and bad angels (demons) are nourished by the sparks of life from the semen which is wasted. Special prayers were even composed for healing the bad effect of involuntary ejaculation at night. In this we can see that in many spiritual studios there is a clear consensus regarding the importance of semen as a life-giving force, as a means for creating new life, and not a source of superficial pleasure and release of stress.

The tantric view, which is alchemical in its essence, sees the fabric of a man’s body and soul as one energetic web. It describes the power of the semen in the following way; “the breath, the thought and the semen are the three components of the potential for illumination. They need to come into harmony and be under conscious control. The yogi who brings together the breath, the thought and the semen, becomes indestructible, absorbed in spontaneous transcendence.” (Kala Chakra Tantra). In this fundamental text, Tantra gives semen the status of a potential tool, which may, together with thought and breath, lead to the ultimate human accomplishment: illumination.

Tantra does not leave things on a theoretical level alone. It describes very practically ways to avoid ejaculation, how to reabsorb the semen into the body, and how to use the energy which is preserved to bring real evolution to the body, mind, soul and spirit.

Even in modern times, people who practice Tantra and Taoism report a significant increase in physical and mental strength, in clarity of the mind, and a slowing down of the aging process. These benefits, according to them, are a direct result of maintaining “the living waters” of the sexual fluids in their being.

Now that we know very well why we should not waste our semen, we are faced with the question: how can this be accomplished? This is, of course, not a simple question, especially for a man who has never tried to refrain from ejaculating. Far from being mistaken as an impossible goal, the act of ejaculation can become a very well-controlled and voluntary action.

The Tantric, Taoist, and alchemical studios describe many ways to bring this function under control, by providing methods for beginners and for advanced students. Together with the physical exercises, these studios also guide seekers toward achieving the state of mind required for entry into the act of love-making.

Before we start revealing the tantric practices, it must be said that if a man truly wants to master his semen and sexual energy, he will need the support of a teacher or friend who has already mastered these energies. This teacher or friend provides not only knowledge and feedback but he is also present for moral support throughout this complex process.

Staying Away from the Point of No-return

So what do you do in real time, when the love fusion reaches its peak and the man is close to involuntary explosion?
In these situations we need to work on three channels simultaneously.

First, the man needs to slow down or even stop physical movement. Then he must slow and deepen the breath. Finally, he must contract powerfully the well-trained muscles of the pelvic area, while relaxing and focusing the mind.

By breathing deeply and attentively through the nose, one can help to peacefully contain intense sexual passion. The contraction of certain muscles in the pelvic area, which must be learned from a qualified teacher, help to absorb the sexual fluids into the body. The pulsation of the contractions, energetically raises the sexual energy upward from the sexual center toward the spiritual center. The silent focus of the mind, which also needs to be learned from a qualified Tantra teacher, raises the sexual passion to higher and more elevated passions, leading to refined states of love, and a very profound meditative state.

These three methods can be practiced individually or simultaneously. As a Tantric following this path, you will get a feel for the method(s) which best fit you and give the best result for you. In all cases, control of the breath and the pelvic muscles are necessary for beginners. The efficiency of the exercises greatly increases for those with a daily Hatha yoga or focused meditation practice.

In Tantra, thoughts are not dragged after the urges, but rather both thoughts and urges follow the strong will of the Tantric. In order to facilitate this process the Tantric focuses his mind continuously on one of the higher chakras (i.e. the heart chakra or third eye center). This continuous focus directs the sexual energy, which is increasing throughout love-making, to rise to this center. This rising of energy from lower centers to one that is higher is an example of the process called sublimation. We will talk more about this process in other articles.

These methods, which use the power of the mind, come more naturally to those who have some experience with meditation, as they know how to control the mind to some degree. Using the power of the mind is not easy, but it is the most powerful and effective of these three methods. In the words of the fundamental text on Hatha yoga by Pradipika: “The semen depends on thought and life depends on the semen. Therefore both the semen and thought must be handled with care.”

More about how to control the masculine sexual energy in the next and last part of this series.